So I've had the Oxford for a couple months now, and a few events have occured.

As promised, the drum brake has firmed up, and now feels like a normal brake, rather than the "ice cube on teflon" feel it had when new. The dynamo lights have worked perfectly, no problems at all.

In the previous post I regarded the shock front fork on the Trek with some suspicion, even though it had given me no trouble over thousands of miles of riding, purely because it was a moving part, and moving parts break. This was because, after riding the bike for ten years, I honestly thought that the shock fork didn't do much.

This illusion was dispelled the very first time I tried hopping off a curb on the Oxford. It hurt! Shock absorbers really do absorb shock! It also doesn't help that the Oxford wears narrow 32C tires. Less rolling resistance, sure, but the point of a commuter bike isn't to go fast, it's to have minimum maintenance cost, along with maximum comfort. (It's also no small consideration that wider tires have better traction, since a commuter bike spends more time braking hard and taking sharp turns than a racing/touring bike.) If I was building another bike, I'd certainly get wider tires, and maybe think about a shock fork.

While we're on that subject, the stock Kenda tires have the puncture resistance of wet tissue paper. In the first month of owning it I got two flats in the rear wheel, one of them due to a glass splinter that was, at most, 2 millimetres long. Replacing the rear tire is especially annoying, since you have to disconnect the hub shifter, take off the chainguard, etc etc.

I switched to Panaracer Urban Max tires, and haven't had a flat since. 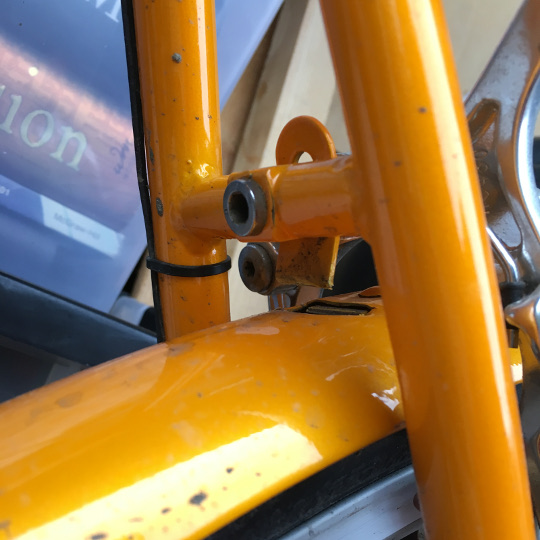 The first google hit for "lasercut stainless steel" is Lasergist. Their site is excellent, and the prices are cheap. Something they don't go out of their way to tell you is that they're based in Greece, and transit time for international letter mail is something like two weeks. If you're impatiently waiting for a part to arrive so you can fix your primary commuter vehicle, then this is something you might want to know ahead of time!

Once the damn thing got here, I had to put a 90 degree bend in it. You might ask, can you put a bend in 2mm stainless steel with just a vice, a hammer, and some locking pliars? 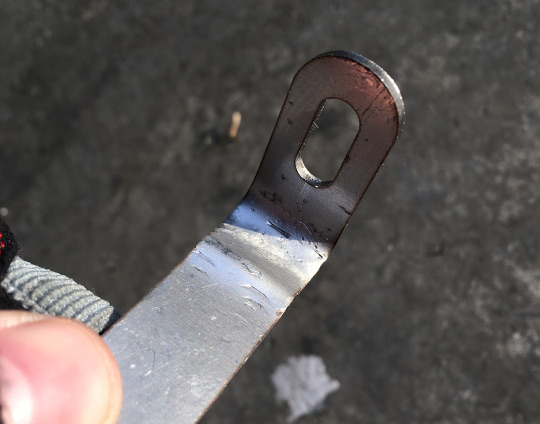 Now I needed to drill two holes in it so I could rivet it to the fender. Somehow I had forgotten that 302 stainless is legendarily annoying to machine. It's a little harder than mild steel, but it's worst feature is it's very bad at conducting heat. This means when you try to drill through it, the metal right next to the drill bit gets very hot, and heat-hardens. To drill stainless steel you want to use very low bit speeds, and cool the workpiece, either with drilling fluid or water. Smart guy right here did the pilot holes dry, and at the highest bit speed my drill could do. As a reward, I got to spend a full 30 minutes drilling two 5mm holes. 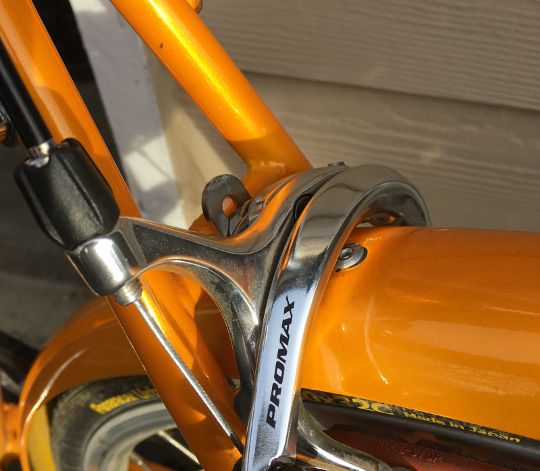 But now it's fixed, and it's real unlikely it'll break at the same spot.