putting together a commuter bike 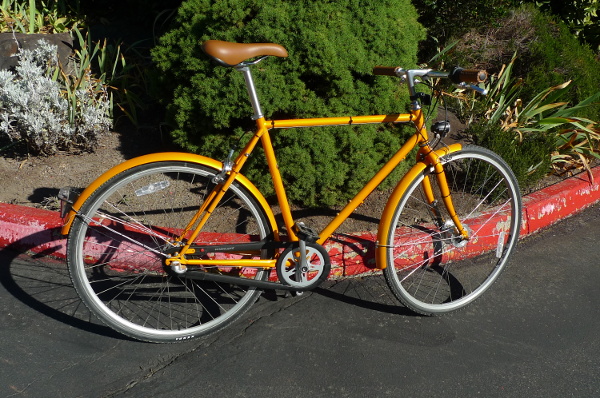 This is my bike, a Windsor Oxford,[1] in Tangerine, serial number L150101593. There are several hundred thousand like it, but this one is mine.

I've been commuting on a Trek 6000 for the last 10 years or so.[2] The Trek is great, but it doesn't really want to be a commuter bike. There's no braze-ons for fenders, so I use clamp on fenders, which pretty reliably slip out and get eaten by the front tire. There's no kickstand, of course. It's got a shock front fork, which has never needed maintenance, but is probably waiting to spring a repair bill on me. All the lights are battery powered, which means on dark mornings, (8 months out of the year in Seattle) I have to turn on three different lights. And each of them have a different startup sequence! My helmet light is just a single press, but the tail light wants two presses, (one to turn it on, one to switch to blink mode) and the headlamp wants one long press. And they all take different batteries!

And, most importantly, I recently had to shell out $350 to get the entire drivetrain replaced, due to wear. Wear that was dramatically accelerated by the fact that I wasn't cleaning the chain very often. I glumly regarded my future stretching out ahead of me, a future of cleaning my bike's chain once a week, and decided, screw it, I'm getting a new bike.

Local bike shop Aaron's Bicycle Repair frequently puts together Seattle commuter bikes: single-speed or hub-geared bicycles with dynamo lights, full fenders, and a Hebie Chainglider covering the chain. (A Chainglider is like a chain case, except lighter, and most importantly, not as stupid looking.) The idea sounded great, so I stole it.

I bought the Oxford and had it shipped to work. (I got a paint blemish bike on sale for $299) Bikes Direct say the bike comes "90% assembled", which is a great joke. Assembly is not straightforward, or quick. There are no directions. (There is an "assembly instructions" link on the site, which doesn't have instructions for this model) You need a full set of hex keys, and some experience wrenching on bikes. It took me about an hour of messing around to get it together.

I then took it to the shop and spent another $600 on it. (From a cost-cutting point of view, the new bike project was not a roaring success)

The Nexus hub came from the factory largely unlubricated, a frequent complaint online, so I had them grease it. It was also geared for geriatrics or for people interested in scaling cliff faces, so I had them swap in a 19 tooth cog. (That gives me a 44/19 ratio on the middle gear setting, just fine for my mostly level commute) The swept bars it had from the factory were just insanely bad, so I flipped them. Aaron gave me a hard time for that,[3] so I had him put on flat bars.

Then, of course, the dynamo, front light, and rear light, which together added up to a solid $300-- about as much as the bike itself. The dynamo is a Sturmey Archer X-FDD dynamo/drum brake. As advertised, fresh drum brake pads are not supremely grippy. Supposedly it develops some decent brake power after you put a few hundred miles on it. (I do 30 miles a week)

You don't really want to brake all that hard with it, though. Unlike rim brakes, it transmits all the braking torque through a reaction arm to just one side of your forks, which is how this lunatic pretzeled their fork by doing stoppies. I probably won't be trying that with my light, value-engineered front fork made from premium Chinese steel.

Oddly enough, the manual says nothing about replacing the brake pads. Rim brake pads seems to need to be changed every few hundred miles, but assuming the drum brake uses the same pads as in automative drum brakes, they would have a service interval of 50,000 miles, at which point Sturmey Archer seems to advise throwing away the hub and buying a new one.

The lights are the Busch & Müller Lumotec IQ Cyo Premium Senso Plus and 4D-Lite Plus. In the grand tradition of German electronics, you get to cut the wires to length and crimp the connectors on yourself. Despite being a professional electrician for a number of years, and possessing the correct crimping tools, I managed to screw up the crimp on both spade connectors, and just soldered them on. (It also comes with two pieces of heatshrink tubing, making the confident assumption that the customer already owns a heat gun.) The headlight has a 3-position switch somewhat mysteriously labeled "T, S, O". What does the T stand for? Well, tagfahrlicht, obviously. ("Daytime running light") Never thought I'd miss inscrutible Euro internationalized symbol glyphs.

But! Once you start moving the bike, the damn things just turn on, and when the bike stops moving they turn off and now that I've installed them I'm not going to have to touch them again for years, which is mostly worth their incredible expense.

1: As you might guess from the hyper-Western name, Windsor is a Chinese manufacturer.^

2: Fun fact, that was my very first blog post, which means this blog is more than ten years old now.^