fun and games with 3d printers 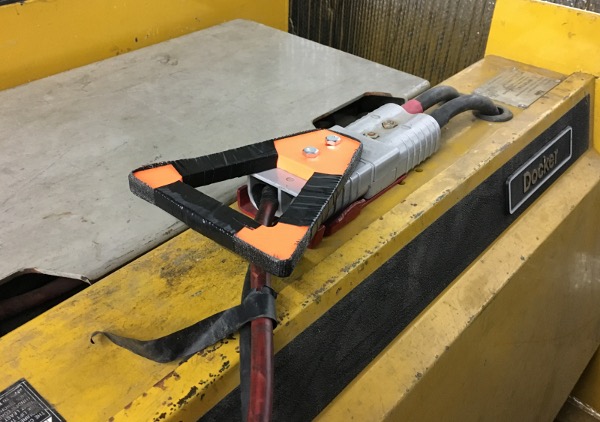 This is my handle for an Anderson Powerpole connector. There are many like it, but this one is more expensive than most.

We recently bought a used forklift, which, like nearly all electric forklifts, has a big lead acid battery connected to the forklift by a beefy 350 amp DC connector. These big connectors are not trivial to insert and remove, and since you generally want to charge a forklift nightly, I found myself spending a lot of time wrestling with it. Anderson makes a connector handle for just this reason, but Grainger wanted $20 plus $10 shipping. Outrageous! Are we not men? Do we not have 3D printers with which to produce trivial plastic parts like this? I slapped together a simple model (source) using the parametric CAD program of choice for cheap bastards, Solvespace, and took a quick jaunt downtown to get it printed at Metrix Create Space.

This handle was conveniently easy to 3D model, but it's not actually a great candidate to 3D print, since it's so big-- about 200 cubic centimeters. Even cut in half to reduce machine time, it cost me $40 to print.

Like the last one, from a cost-cutting point of view, this project wasn't a success.

I was kinda worried that the half-height version of the handle would break off as soon as I used it, so I threw a fiberglass overwrap on it using a package of Fiberfix that was going to expire soon anyway. And it works! Qualified victory!