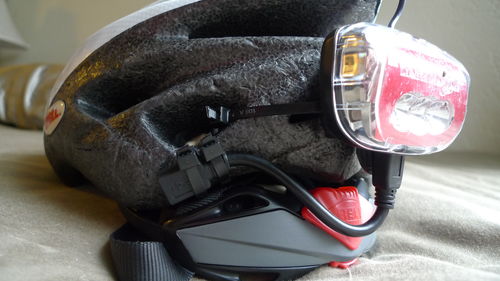 My bike helmet light, the Light & Motion Vis 360, like basically anything with a battery in it nowadays, charges over USB. Unfortunately, USB sockets aren't invulnerable, and after a couple years of bike commuting, mine loosened up to the point that it wouldn't charge.

Well, I'm a handy fellow, so I opened up the light, got out my fine tip temperature-controlled soldering iron, and promptly lifted a couple tracks. Whoops.

Light & Motion charged me $48.75 for a new logic board and battery, which was reasonable enough, but I really don't want to spend $49 every two years as long as I own this light. Isn't There A Better Way?

There sure is! Connector savers!

Connector savers are much more common with test equipment and in the aerospace world, (Indeed, the first place I heard about them was in NASA-STD 8739.4) where a single big multi-contact connector can cost thousands of dollars, and be rated for surprisingly few cycles. But hey, nothing stopping me from putting a connector saver on my piddly little bike light.

I wanted a connector saver with a flexible bit in the middle, basically a very short extension cable. This was hard to find. Newegg's cable category has really lousy search, and while Amazon did have what I was looking for, shipping would be annoyingly expensive, and I didn't really want to give the Beast from Lake Union any more business, given that my company directly competes with them in a couple markets.