As you have no doubt not noticed at all, this blog has in fact not updated in two years. I am not dead!

Two years ago my hosting provider went bankrupt suddenly, erasing all user data in the process. I had backups, of course, but inconsiderately neglected to back up my home directory on the server, which happened to house my Nanoblogger installation. (A shell script-based static site generator (basically Jekyll for cavemen) so old that it has not been updated since 2011, for whom development was suspended in 2013, and is currently hosted on Sourceforge, a software host so wildly reviled that the domain is now blocked by uBlock Origin.)

The prospect of rebuilding the data files was so daunting that I put it off until "next month" for 24 months in a row, until I finally got around to it, today. So, hi.

I have been updating my tumblr in the mean time. There are some amusing posts on it, like this one!

I don't want to come off as a solar power hater with these posts. Solar power is our future, it is inevitable, and it is a thing that must be done, because oil sure as heck isn't going to last much longer.

But solar panel roads are never going to happen, not for centuries, at least in the United States. Solar driveways probably will happen, but as a toy of the rich.

Let me tell you why. There is one single figure of merit in a PV system, and that is cost per peak-kilowatt installed. For giant, utility-scale installations, it's around $1000 per KWp, because you can get better price breaks when you buy ten million bucks of solar panels at a time, and permitting costs, which remain roughly constant, make up a smaller proportion of the total price. For large residential installations, $2200 per KWp is a better bet.

The Wikipedia article on PV systems has a very useful table:

Installed cost per KWp is on the left, insolation is on the top. "Insolation" is how much light you get per square metre of land, and for solar, it's most useful when expressed as kilowatt-hours per day. (To convert KWh/day to KWh/year, you just multiply by 365.25, of course) Las Vegas gets around 1936KWh/y, so for a $2200KWp installation, your electricity costs a little more than 11 cents per KWh. Seattle gets 1289KWh/y, so you'd pay ~14 cents/KWh.

And here's the big problem, the central issue around which everything in the solar industry revolves: Conventional electricity in Washington state costs about 8.2 cents/KWh. Solar is a solid 80% more expensive. The only places where PV is at grid parity is in deserts.

PV is expensive. The solar industry is on a mad, headlong dash to cut costs as much as possible. They want grid parity, they are seeking it, seeking it, all of their thoughts are bent on it

I've also been writing for my employer:

The requirements are open-ended, but challenging. It's got to be made of (mostly) VEX parts, be novel, and be interesting. 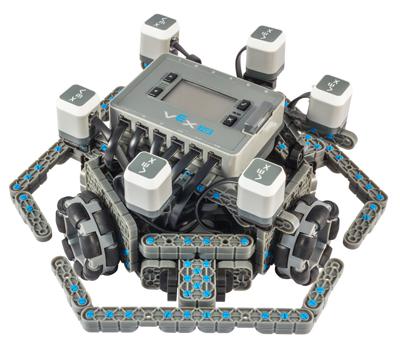 Normally, to check the state of six touch sensors in a single if expression, you'd have to do something like:

This has a number of disadvantages:

I've also been tweeting, to the immense regret of everyone, everywhere. I am of course hilarious and beloved:

Follow me on all these platforms, or don't, it's up to you!